The Riverhead Community Coalition for Safe & Drug-Free Youth successfully worked with the Riverhead Town Board to adopt the town’s first Alcohol Policy for Fairs & Festivals. 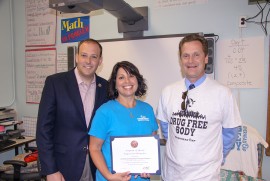 So far, the coalition has provided TIPS training, wristbands, signage (in English & Spanish), and incident report logs to the Polish Town Civic Association and the Rotary for their 2015 events.

The results of this data prompted the coalition to begin conducting youth focus groups, interviews with fair organizers, and environmental scans during and after the events. Youth focus groups confirmed that it was very easy to bring in alcohol and to get alcohol at these events. The coalition found that the town lifted its open counter ban for the day so that people could drink alcohol in the streets during these events. The lift on this ban made it hard for law enforcement to do their job and ticket those who were drinking alcohol where they should not be. The interviews and environmental scans also revealed that alcohol servers at these events are volunteers that had no formal training in responsible serving of alcoholic beverages. The coalition also found that delis were violating their liquor licenses by serving/selling alcohol for people to drink in the streets. When coalition members did their scans, they found garbage cans and tubs full of iced single beers right next to the entrance for sale. They also found that people were bringing their own beer into the event and that there were no enforcement for people who took their alcoholic beverages outside the fair barricades.

These findings were very concerning to the coalition, so they began discussing a plan to make outdoor events a healthier and safer environment for youth and other community members.

The idea of having beer gardens at these events was just too much for many locals; it created a massive outcry in both local media and social media and the Town Board backed down. They did however, ask the Town Attorney to draft an alcohol policy and requested the coalition’s assistance.

In addition, the coalition is on the planning committee for a new outdoor event in Riverhead to ensure that they are following the guidelines within the Town Alcohol Policy and to provide support where it is needed.

For more information about the Riverhead Community Coalition for Safe and Drug-Free Youth and Riverhead Town Alcohol Policy, please visit the coalition’s website at RiverheadCAP.org.